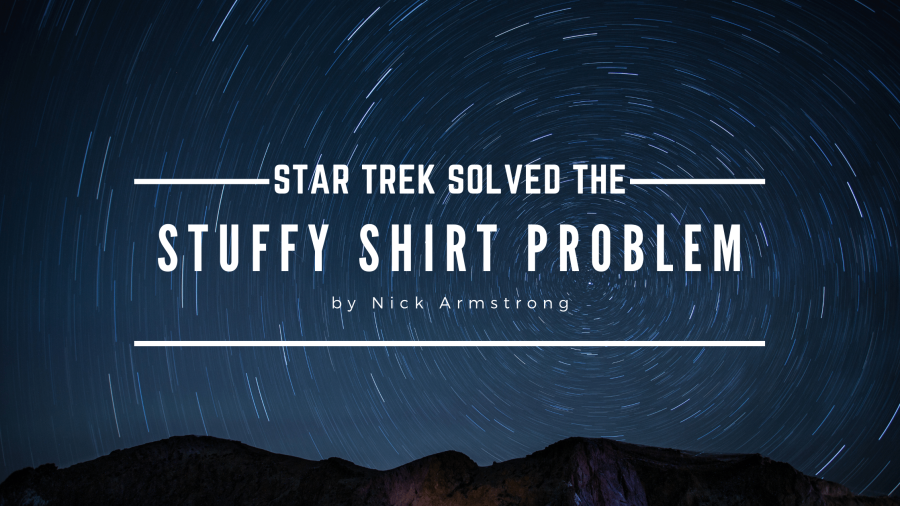 Star Trek has traditionally had a stuffy-shirt problem, especially via fans of The Next Generation (think Picard/Riker/Data era).

The ethics of the 24th-century Federation were so lofty as to seem unachievable and unrealistically idealistic to many. I grew up as one of those insufferably idealistic kids, espousing the virtues of Trek wherever I went (usually received by much eye-rolling).

My depth of appreciation for Trek has grown over time. With political divisiveness, scientific denialism, and challenges of caste and equity asking questions of our fortitude and morality, there are urgent and actionable takeaways from the 24th-century vision of Humanity.

Those humans did not always agree, except that it was more agreeable to work together toward making everyone better – safer, happier, and healthier. The critical questions of who, what, when, where, why, and to what degree were matters for impassioned debate, arguments, and some of Trek’s darker moments. Writers across the ages pulled from humanity’s most turbulent times for fodder to fill each weekly adventure.

Voyager’s Janeway was a pillar of daily candor, leadership, tenacity, and equanimity in the face of impossible scenarios. She was also a really lofty person to emulate considering where the 21st century was at.

Star Trek: Lower Decks has solved much of the “stuffy-shirt” problem by demonstrating that the shining beacon of 24th-century Starfleet ideals demands constant vigilance and work to fight against the backward slide of complacency.

It’s not enough to just defeat the baddie of the week, you have to stick around and provide stopgaps against opportunists, educate and teach to help elevate health, safety, basic rights for all… Lower Decks addresses that in surprisingly astute ways for a Star Trek cartoon from the creators of Rick and Morty.

Great, so… what’s Star Trek got to do with real life?

There are two critical virtues to bring 21st-century humanity kicking and screaming forward to our better selves:

1. the value of Infinite Diversity in Infinite Combinations. Not only are a multitude of opinions, backgrounds, genders, races, political views, and abilities on display week after week in Trek, they are intrinsically valued for their ability to provide new perspectives to create a cohesive whole.

Disagreements weren’t resolved by “agreeing to disagree” but by working diligently through tricky problems using evidence, building bridges between the best of people, ideas, and abilities to make things better for everyone.

One of the most surprising moments from this season of Discovery has to do with owning up to feeling helpless – that it is often temporary and doesn’t equate to weakness. Another moment from that same episode: fear isn’t weakness and it’s a good place to start asking questions from.

For what it’s worth, this is a lesson repeated across fandoms – including Frozen 2’s darker moments.

2. the value of historical, intellectual, scientific, and personal honesty. The truth is valuable, as is the scientific method, and disagreements should be fairly evaluated.

The principle of honest intent is key – that others can and often do operate from a place of good intent, even if we cannot see that from our perspective, even if it requires work for us to see and understand.

What we consider bad behavior is often the result of earlier choices that went astray because of abuses of the truth.

I’d prose that these two virtues are necessary to humanity’s survival.

A third more utilitarian virtue is an idea borrowed from Starfleet’s infamous duct-tape engineers: there isn’t a problem we can’t solve.

No matter how dire or confounding a problem, we can figure it out – but we can’t get anywhere by hiding from it.

This one is important but functions only with the adoption of the first two.

You cannot solve problems from a place of dishonesty and without enough frames of reference to understand its nature.

Star Trek has long served as a wide-eyed blueprint into the future of humanity. It’s idealistic and it necessitates hard work worth doing. It requires teamwork, a partnership, and the ability to see past differences to form a better whole.

Any kind of future requires hard work… might as well be hard work worth doing.

That work doesn’t start or stop with voting. It’s an ongoing effort to connect the dots toward a better future and postpone or prevent backward slides.

Do the hard work worth doing. Do the hard work alongside people who are different than you, bring communities together, and embrace differences because they almost always make solving tough problems easier.

Do the hard work of using evidence to support your ideas, to change your mind, to be honest about things that need changing, and to do things differently if they should be done differently.

Do the hard work because it makes you, your community, all of us, better.