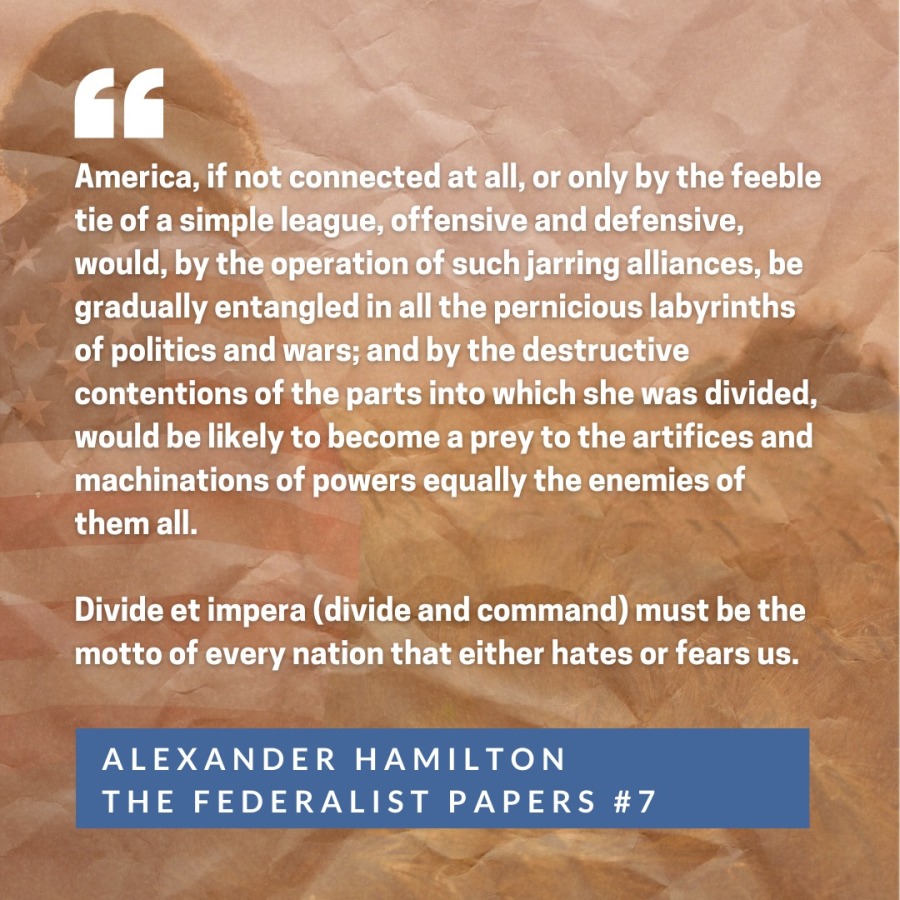 I started reading through The Federalist Papers, a series of essays written by John Jay, James Madison, and Alexander Hamilton.

If you’ve never read them before, they’re a smidge dense:

The TL;DR version of what Alexander Hamilton is saying above in Federalist Paper #1: good government and liberty go hand in hand. Demanding individual liberty without checks and balances to ensure every individual those same liberties is a sure road to despotism. Populism is often a pathway to tyrannical behavior because it encourages an undermining of the checks and balances of efficient laws.

The essays were originally written to encourage the citizens of New York to ratify the new US Constitution which had been drafted the year prior, but they’re eminently quotable right now because of the profound level of discord in politics that is also tied very closely with personal identity.

Reading through The Federalist Papers and Common Sense by Thomas Paine, these political pioneers and founding fathers time and time again place tremendous value in the idea of synthesis and taking comfort in thinking through cognitive dissonance to solve problems well.

F. Scott Fitzgerald put it this way: “The test of a first-rate intelligence is the ability to hold two opposed ideas in mind at the same time and still retain the ability to function.”

John Jay’s words from The Federalist Papers #4: “when a people or family so divide, it never fails to be against themselves,” and Alexander Hamilton’s from #7: “America, if not connected at all, would be gradually entangled in all the pernicious labyrinths of politics and wars; and by the destructive contentions of the parts into which she was divided, would be likely to become a prey to the artifices and machinations of powers equally the enemies of them all. Divide et impera (divide and command) must be the motto of every nation that either hates or fears us.”

TL;DR version: divide and conquer is the name of the game. A family, community, or country divides against itself FIRST and those separate pieces are easily played against themselves by enemies of the cohesive whole. There’s nothing wrong with vehement disagreement as long as everybody remembers they’re in it for the good of the whole.

We. Are. Not. Divided. We can and will disagree fervently about many things, but the underlying assumption of HONEST INTENT shouldn’t fade just because of a political leaning.

We can disagree about the nature, cause, or solution of a problem, but as long as we focus on solving the problem over being right, we cannot be subdivided and our intention and commitment to the firm foundations of a more perfect union is reaffirmed through each instance of civil discourse.

The problems we’re facing are numerous and complex with intricacies that require multiple modes of thinking. It’s too damn easy to shrug and finger point and blame “the others”. Start fixing things. Take ownership. Dig in, have the hard discussions in forums that matter (e.g. NOT Facebook but City Hall), debate kindly, discuss the problems, not the people.

When it comes to divisive politics: Stop it. Insist your favorite candidate or political party stop it. Insist your local, state, and national leaders stop it. Call it out wherever you find it. Recommit to a better country, more civility, more understanding, and more patience. That’s our path to a prosperous future for everyone.